"It was clear the show would be a success before it even began with a line of people weaving through the hallway 15 minutes before the UC Auditorium opened for seating Thursday night"...

It was clear the show would be a success before it even began with a line of people weaving through the hallway 15 minutes before the UC Auditorium opened for seating Thursday night.

The Lambda Student Union Annual Drag Show pulled around 500 people into the auditorium, and Cat Miller's hopes of nearly filling the venue were satisfied.

Miller, Lambda president and senior in kinesiology, said the show allowed for open expression and a chance to break boundaries.

"I, personally, decided to keep the drag show around because I believe it brings a unique culture to UT, that many students are afraid to take part in or appreciate," Miller said. "A drag show allows performers to explore and play around with their gender expression, whether that be only in their drag persona or in their daily lives.

"Our culture is often really negative to those people that don't confirm to the accepted forms of femininity or masculinity, as you can tell by the negative comments surrounding 'Sex Week'. If people don't fit the typical 'cisgender heterosexual' profile, they are seen as a perversion and dismissed. That is the attitude we have to get away from, Variance and diversity in gender and sexuality need to be accepted and celebrated, not neglected and misunderstood."

The event was co-sponsored by the organizers of UT's "Sex Week" and sex toys were donated to be auctioned off, with proceeds going through Lambda, as do all tips and other donations.

Performers from The Edge bar on Kingston Pike, Xena and Vanity showcased their talents alongside guest Anastasia Alexander, who performs three nights a week at the Carousel II, the infamous gay night club located just behind the UT College of Law. Alexander said she came out to support the cause after being invited by her friend and fellow performer, Victoria Frost.

Alexander seemed to have the crowd's heart with her seductive moves and risque tricks, even jumping off the stage at one point during her performance. She has performed drag for the past three years, and her experience was well rewarded. At one point, people lined up and waited for Alexander to retrieve their tips - some tucked in their shirts or between their lips - with her mouth.

Although Anastasia seemed to be the crowd favorite, the other performers had no trouble earning big tips as well. Frost was another crowd pleaser. While she lip-synced to Carrie Underwood's song "Before He Cheats," she was showered in tips. The crowd showed her no less love when she performed to "Jump" by Rihanna.

A few duets were also among the crowd's favorites. For one set, performing to a remix of songs, the couples shocked and awed the audience with their synchronized dance moves and seductive stage grinding.

The other outstanding couple had the audience's attention with their performance of "Dick in a Box," the hit song from The Lonely Island featuring Justin Timberlake.

Prospective UT student Jacob Proffitt said he enjoyed the event and the generosity of the crowd.

"I thought it was great how the set ended," he said. "(The audience) blew their loads... of ones." 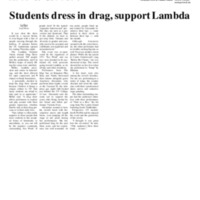