Elliott Devore, senior in psychology, received the Chancellor’s 2009 LGBT Student Leadership Award for his work as an
orientation leader during the summer of 2008.

Devore was awarded this honor because he
worked to make the orientation program more inclusive. In particular, Devore developed a new idea for a skit dealing with LGBT issues, something new for UT’s traditional orientation program.

“We have a skit during orientation called the ‘issues skit’ that deals with different things that first-year students might encounter, like alcohol, homesickness, academic stress and then also different diversity issues like diversity with race,” Devore explained.

The skit featured a gay student, played by Devore, who comes out to his roommate. The student has experienced some harassment but finds his place on campus through the help and acceptance of his roommate. In the play, following the student’s coming out, he and his roommate visit their resident assistant, who gets the student connected with campus resources for LGBT students.

“In the past LGBT issues haven’t necessarily been addressed,” Devore said. “I thought it was really important to include those because the way that university housing is set up is sex-segregated, so it can be really uncomfortable for an LGBT person to live on a floor.”

The skit encouraged openness from LGBT students’ peers and those working in university housing and also shared information about some of the resources available to LGBT students, Devore said.

As part of this goal of making campus leaders more aware of LGBT issues, Devore also worked with the orientation director to change the session titled “Straight Talk’' to “Vol2Vol,” which was no longer sex segregated.

“I talked about how segregating people like that can make students feel very uncomfortable, who are gay or lesbian or bi or people who are transgender. Because if they’re transitioning, they have to identify what sex they identify with and that can make them feel really uncomfortable,” Devore said. “So we restructured that, so the
boys and the girls could be together. And we changed the name of that session to ‘Vol2Vol' just so it didn’t have that negative connotation of ‘straight’ talk.”

Devore experienced some resistance to this change, because, as he said, “UT is a very traditional school.”

As part of this shift to a more inclusive orientation program, Devore presented and discussed different LGBT student issues with
his fellow orientation leaders, stressing “how important it is for them as orientation leaders to set the tone at orientation about being inclusive, with their language and how they act to students,” Devore said.

“The first thing students experience at UT, unless they took a campus tour, is orientation, and if they get a bad feeling from day one, what kind of message does that send about the rest of the university?”

“What I did in that training session during the summer before, I really impressed upon (the orientation leaders) how important it was to have a more open point of view,” he said. “I talked to them about different issues like coming out and talked to them about how to handle the situation and gave them resources.”

While the other orientation leaders were supportive of this focus on LGBT issues, the audience was not always supportive or receptive.

“People in the audience would try to call out ‘fag’ or ‘queer.’ But that’s just a maturity issue,” Devore said. “It kind of sucked at first; the first few times it happened it hurt my feelings, but then as I thought about i t ... I’d rather have my feelings get hurt and there be a few gay students in the audience who thought, ‘I feel more comfortable coming to UT because there are other gay people. And it’s OK to be gay at UT.’”

Devore also talked about the attitude of UT students as a whole toward their LGBT peers.

“There have been campus climate studies done,” Devore said. “I know a majority of students that are gay (who) have experienced harassment or feel uncomfortable in a lot of situations, just different areas. I know I’ve been harassed before, called fag to my face.”

“I’m definitely comfortable in my skin, so I’d definitely say that a lot of people aren’t as comfortable with their sexuality just because I’ve been out for so long. So for me, I try to help others be comfortable with themselves,” he said. “Everyone and their mom knows I’m gay; they just know that about me. I wish the campus would be more friendly.”

Devore is also a voting student member of the Chancellor’s Commission for LGBT People, which is opening a LGBTA resource center in Melrose Feb. 25.

“It’s going to be a central office for programming for LGBT issues, just like a place for students to come hang out, feel welcome,” he said. “It’s the same concept and idea that the Black Cultural Center is geared for, for black students and also minority students; it’s the same idea for the LGBT resource center.”

The LGBTA resource center, which is still in need of donations such as basic office supplies and other resources will feature “a lot of book resources like magazines and different programming ideas,” he said.

“It’s been a long time coming, so it’s really, really exciting for the commission to be able to do this,” Devore said.

The center will open alongside a series of lectures given by John D’Emilio, who will speak on campus in two large events and potentially several smaller events on Feb. 24 and Feb. 25. His two main lectures are titled “Lost Prophet; The Life and Times of Bayard Rustin’’ and “Leaping and Creeping: How Gay, Lesbian, Bisexual, and Transgender People Have Fought to Achieve Equality.”

Devore encouraged LGBT students to get involved with Lambda Student Union, which organizes a lot of social events and participates in activities such as National Coming Out Day (Oct. 11) and National Day of Silence (April 16).

“It’s definitely like a security network I would say for students who are gay or bi or lesbian or trans, just to come and feel welcome,” Devore said.

Devore said he is excited about the progress being made on this campus to make it a more welcoming place for LGBT students.

“I think (with) the opening of the resource center and a lot of other programming that the university is doing, it’s going to create a much better, more positive and welcoming atmosphere for LGBT students.

“And then people won’t think, ‘Oh, the University of Tennessee, a bunch of hillbilly, redneck people,’ but eventually one day it be, ‘Oh, the University of Tennessee, some of my gay friends went there, and they said they felt really welcomed,”’ Devore said. “I really feel like we’re on that path with all of the initiatives that the university has going on right now, which is really exciting.” 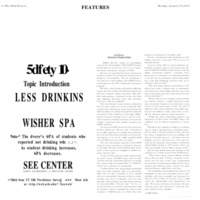